Bård A. Berg, chair of the UArctic Indigenous Peoples Issues Committee (IPIC), visited the Nisga'a First Nation in northern British Columbia, Canada, on March 9 and 10.
Their community college, Wilp Wilxo´oskwhl Nisga´a (WWN), is a member of UArctic.
Berg's first meeting was  in the Nisga'a Governmental House in Gitlaksdamiks (New Aiyansh) with Harry Nyce (photo below) and several other governmental employees. 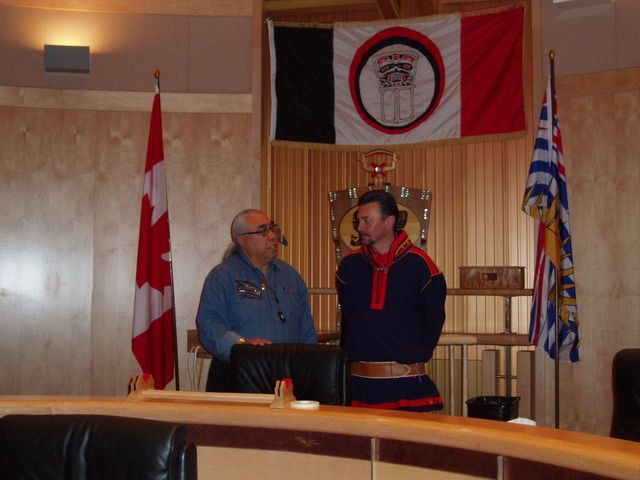 Berg then met with the board of the Wilp Wilxo´oskwhl Nisga'a, also in Gitlaksdamiks and spoke about the University of the Arctic and the role of the IPIC.  Berg also gave a lecture about his own research project this year (he is a Fulbright scholar at the University of Washington, Seattle): Sámi immigration into the Pacific Northwest. There was a discussion about similarities between the Nisga´a and his own people: The Sámi of Northern Norway.
The same afternoon Berg visited chief Johnny Robinson´s oolichan fish camp in Fishery Bay. Oolichan fishing is a key activity for the Nisga´a in early spring, because the oolichan is the first fish species that can be caught in the Nass River after the winter season. These fisheries are extremely important.